In 1991, years before cloud computing was a thing and the first iPhone went on sale, two grants managers walked into a bar.

Though it sounds like the setup to a joke only a grantmaker would understand, it turned out to be the origin story of what would eventually become PEAK Grantmaking.

Within a year of that auspicious meeting, those same two visionaries, Margaret Egan and Ann Gael, invited a larger group of their peers to join their discussion. Eleven people showed up. Though small in number, they came with big ideas. Among them, how to strengthen the field of professional grantmaking.

Connecting people and catalyzing new ideas would become the lynchpin of GMN’s founding vision. In 2002, with support from the Rockefeller Family Fund, the organization marked a major milestone, expanding nationally and holding its first national conference.

A bigger vision for the future

That milestone was but one among many in GMN’s history. Another was in 2017 when the organization rebranded to become PEAK Grantmaking.

To the organization’s leaders, the change was more than symbolic. It was intended to “more boldly and persuasively convey the strategic value of grants management professionals and practices in realizing philanthropy’s full potential to fuel change for good.”

It’s a vision that PEAK has pursued assiduously. That same year, it released a groundbreaking new framework intended to define the knowledge, skills, and abilities expected of grants managers. Known as the Grants Management Professional Competency Model, it was the first comprehensive look at the grants management profession -- one squarely aimed at strengthening the impact of its members and the field as a whole.

A quarter-century of impact

This year PEAK marked yet another major milestone — its 25th anniversary. That event, on the heels of arguably the most pivotal year in the modern history of philanthropy, produced an especially bold, diverse, and productive PEAK2021 experience.

PEAK delivered on its promise to mark its 25th anniversary with an event that would inspire new ideas and catalyze change.

Over the course of eight days, more than 1,300 PEAK members came together virtually to reimagine the future of philanthropy.

A dozen members of our own team attended, including our SVP of Business Development, Roberto Cremonini, who led a panel discussion on Adapting During Turbulent Times, which featured case studies from two of our clients, Jamie Amagai of The Summit Foundation and Ashley Clark of The Libra Foundation.

Throughout the conference, our team used a dedicated Slack channel to capture our observations. The channel quickly filled up with memorable quotes and screenshots of notable data points. We also shared insights related to philanthropy writ large and our own efforts to help foundations align our purpose-built tools with their initiatives and goals.

By the close of the conference, one thing was clear to all of us: PEAK had delivered on its promise to mark its 25th anniversary with an event that would inspire new ideas and catalyze change.

We decided to take this opportunity to share four of our biggest takeaways here.

1.  Responsive philanthropy is here to stay

In the face of the COVID-19 pandemic, widespread social unrest due to racial injustice, and unprecedented threats to our democracy, several sessions focused on what it means to create a true partnership with grantees.

After years of resistance, several speakers highlighted how the events of the last year pushed their foundations to take unprecedented steps, such as awarding multi-year general operating grants for the first time.

Many also talked about a greater commitment to transparency, ensuring openness with grant applicants about their foundation’s processes and priorities.

Several panelists, as well as many attendees, shared that their foundation will likely retain these new practices well after the pandemic ends. Paperless processing of documents and electronic funds transfers were among many examples cited in presentations and online chats throughout the conference.

The move from transactional to relational philanthropy was a prominent theme at PEAK2021, and it was music to our collective ears.

Several presenters shared a variety of compelling stories of what form this move has taken. For instance, some funders have taken to hosting phone or Zoom calls with their grantees, allowing for richer interactions that foster deeper relationships with grantees. Others shared examples of how they have simplified their grant applications, waived reporting requirements, and eliminated paperwork that did little but slow down their grantmaking process.

In a session entitled “Building the Future of Philanthropy,” Adam Leibling, director of grants management at Robert Wood Johnson Foundation, challenged funders to go beyond the current mantra of “fix the form” and instead “nix the form” altogether.

The closing keynote featured four women of color emphasizing the need to remove unnecessary barriers that prevent grantees from focusing on their work in their communities. Dr. Carmen Rojas, CFO of Marguerite Casey Foundation, called on her fellow funders to embrace “a bold new path forward.”

3. Now’s the time to think big and be bold

The challenge to think boldly was a recurring theme at PEAK2021. The tone was set early with a rousing opening keynote by LaTosha Brown, co-founder of Black Voters Matter Fund. Her keynote began not with a speech, but with a song about change and resilience. She called on the audience to envision the change we want to see, and encouraged grantmakers to focus on what she calls “the four V’s” of social justice — vision, voice, victory, and values.

A similar note was struck by Maria Nakoe in her keynote describing Justice Funders’ Resonance Framework for Philanthropic Transformation. She asked participants to “imagine a world in which a movement fighting for economic, racial, gender, and climate justice, have won,” and where “people and relationships are valued much more than profits and power.”

She challenged grantmakers to think about what they need to do to collectively shape that future. Like many of her fellow panelists, she called on funders to recognize the need for “the scale of our solutions to match the scale of our challenges.”

The issue of funder/grantee power dynamics is a frequent topic of discussion at PEAK, but this year was different. We heard compelling examples of specific steps funders are taking to make this shift real.

One came from a session hosted by the PEAK Greater Washington DC chapter, which featured case studies from the Meyer Foundation. Julian Haynes, the foundation’s director of partnerships and strategy, discussed the foundation’s heightened efforts to fund BIPOC-led organizations and movements for systemic change.

Julian underscored the importance not just of making bigger investments in BIPOC-led organizations, but in empowering those organizations to determine how those funds are invested. “I want to work toward making the job of program officer, or in Meyer’s case, partnerships and strategy director, obsolete in terms of being like a gatekeeper to the fund,” he said. “It should be entirely community-driven and advised through participatory grantmaking or other means.”

Julian clarified this vision is still an aspirational goal but added: “it speaks to a direction we should be moving in.”

If the chat channels used throughout PEAK2021 were any indication, participants came away more inspired to reimagine the future of philanthropy, and better equipped to meet the moment.

Over the course of those eight days, it became all the more evident just how far the field has come since GMN’s humble beginning in 1996.

But it was more than that. It was an urgent call to grantmakers to harness their influence in new ways to confront the challenges of our time and those that lay ahead.

The pervasive theme of confronting these and other challenges throughout PEAK2021 served to reinforce that GivingData’s focus on building solutions that are flexible, relational, and purpose-driven are in line with the needs and aspirations of grantmakers. We invite our community of users and the broader philanthropic sector to keep surfacing your needs with us so that we can continue to develop solutions that deliver on our shared goal to transform the future of grantmaking.

Looking for tips to streamline and improve your foundation's grantmaking processes? Sign up to receive helpful, actionable insights straight to your inbox. 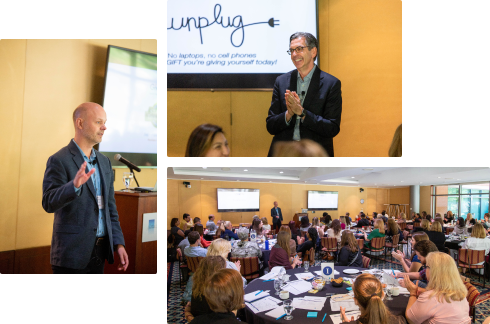 We believe the work you do helps make the world a better place.

Like you, we're driven by the desire to do good in the world. Our role is to help you do your work better, more efficiently, and in true partnership with your grantees. Our team has worked many years in philanthropy. We understand the challenges and we can help deliver on the opportunities.
Meet the team